Edit
This article is a stub. You can help BOCProject Wiki by expanding it.

The Civ traits are part of the Historical progression system inBOCProject.

Along with the Historical progression line, you can unlock a civilization with their Trait trees, Inside in the sand-box progression system context, the player's civilization is the sum of total acquired traits,
The traits bring: units, buildings, actions and passives to their historical civilization.

Each trait has a specific requirement progression points, for example, one node of 'Administration' path usually requires political points.

Each civilization has a different number of Paths, According to their real historical characteristics.. For example the Egyptians New Kingdom have 4 Paths, Administration, Religion, Military and Architecture:

Others like the Early American Tribes have only two, or others like the Romans Eastern Empire have 5 differents paths,
In total exist more than 150 paths trees, with an average of 3 paths for each civilization.

This is a visual Example of pre-alpha trait tree for 'Administration path of Egyptians New Kingdom civilization. 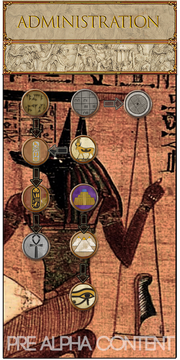